QF DC4 1977_229
Originally uploaded by gtveloce
In 1977 there were 2 ways to get to Norflok Island - by sea, or by air. I guess little has changed in that regard, however the type of aircraft used certainly has changed. This is a Qantas DC-4. Yes, it really is the famous flying kangaroo adorning the tail of an elderly Douglas Commercial airliner, just one step up from the illustrious DC-3. And it's 1977. Why this blast-from-the-past? Because Qantas was obliged to provide a service to the remote Pacific Island (and Australian territory), it retained its fleet of DC-4s until the airstrip was upgraded and the work passed onto smaller but more modern aircraft. The DC-4s had the range and payload to do the job, plus the reliability and safety-over-water of 4 engines, as well as being surprsingly easy on the old grass field at Norfolk.
Posted by gtveloce at 11:13 PM No comments: Convair 990 N8357C Sydney 76_853a
Originally uploaded by gtveloce
It's as close as I could get. The fence is the airport boundary, the rubble is probably just fill from anywhere. This part of the airport (essentially the eastern end, near the 07/25 runway) is just south of what was Ascot Racecourse, a pony racing track up until the 1930s. Behind me is the main airport access road from the east and south and the freight railway to Botany.

The hangars are for Ansett and TAA maintenance. The Convair was a visitor, parked in possibly the worst place for someone to get to, unless you simply walked through the hangars themselves (possible on the right day - it was 1976 after all. I think that's a CSIRO DC3 on the left.
Posted by gtveloce at 4:09 AM No comments:

I can remember visiting the base in the 60s and 70s, when Ansett ran 2 Short S25 Sandringhams (one a converted Sunderland) on trips to Lord Howe Island. Being young at the time and a bit short of cash I was hesitant to actually fly in the darn things (regrettably!) but I watched them land and take off and sitting beached on wheels outside the hangar. I should have at least gone on a charter to Lake Macquarie, to the old RAAF base Rathmines, but I didn't. Oh well. That's life I guess. 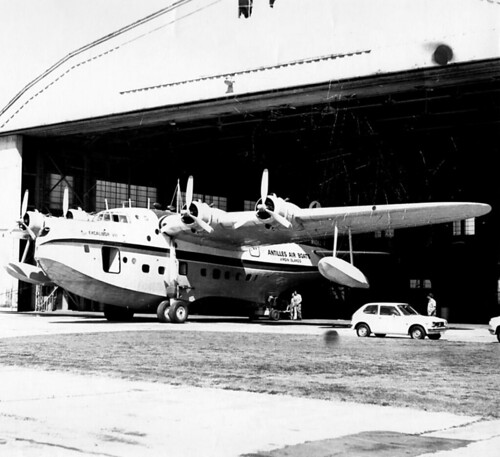 This is one of 2 ex-Ansett Sandringhams prior to handover to Antilles Airboats in late 1974. There were 2 of these 'boats. VH-BRC had the rounded nose of a more 'pure' Sandringham (even though it was a converted Sunderland) and was called 'Beachcomber', becoming N158C with Antilles Airboats in 1974. 'BRC is now landlocked, at Southampton, UK. And VH-BRF, named 'Islander', was a 'near-converted' Sunderland with a blunter nose. It's now landlocked at Miami, Florida.

Rose Bay was the place to see these big commercial flying boats. For safety, when reliability and fuel range were far more critical - read "risky" or "marginal" - the flying boats represented a popular form of "life insurance", especially when operating over water. They could land just about anywhere there was stretch of reasonably protected water. So for international operators like QANTAS, BOAC and Pan Am the flying boats represented a good investment on long overseas routes, despite their bulky, compromised hybrid aircraft-and-boat design. And for domestic operations they could use rivers, opening up destinations like Grafton, NSW, to regular services without the need for dedicated, developed landing strips. Of course that all changed in the decades immediately following WWII as aircraft and engine design improved, safety margins increased and fuel range improved. As the land-based aircraft frew ever more efficient and lighter the design compromises of the flying boat began to weigh much more heavily on the concept. Their days were numbered.

Ansett's route to Lord Howe Island remained a rare anachronism into the 1970s due to the lack of a suitable airstrip. But again, that changed and the service was terminated. 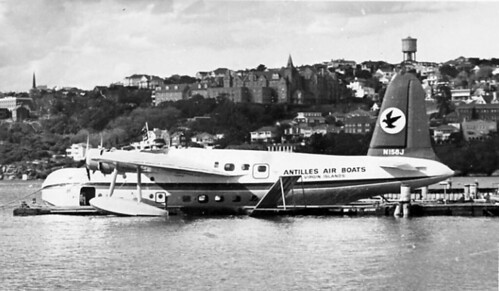 Many thanks to the late James Davidson who helped me get access to the base in the 1970s.


There's not much left to investigate at Rose Bay, sadly - but enough to get a feel for it. There's actually a lot more at Rathmines. Worth a visit!

And worth a read:

Posted by gtveloce at 3:49 AM No comments:

Alexandra Canal is a relic of our past that shouldn't be forgotten. Check this out for its immense detail: http://www.aussieheritage.com.au/listings/nsw/Sydney%20Airport/AlexandraCanal/2551Many's the time in my misbegotten youth I wandered along stretches of Alexandra Canal and wondered "why is it so?". I could see that it was meant to be an industrial canal, like you may find in Europe, but why did it so obviously fail to, umm, "take off"?

If you follow that link you'll get the full story. But here's my take on it... with my own recollections and observations thrown in. Yes, it is a relic of a 19th Century NSW Government initiative to create water transport, one of just 2 in that state and 3 total in Australia; and yes, it was based upon the English canal system. It partly used unemployed labour in its construction. The canal itself played its part in the draining and in-filling of large areas of low-lying in the Alexandria and Botany area, opening it up for development.

It's worth a look. Intact original sections of the "fascine-dyke sandstone construction" are apparently rare examples of late 19th century coastal engineering works. They certainly look it, too. My favourite views of this barely-navigable canal were from the Ricketty Street bridge (love that name) and along Airport Drive (where I spent many hours watching and photographing aircraft landing, of course). Some parts of the Cooks River are lined in the same way.

Alexandra Canal is also known as Shea`s Creek, a tributary of the Cooks River, and it begins in what were once the sandy hills of the present Surry Hills, north of Redfern. The sand hills themselves are long gone but stretched east to South Dowling Street (where Australian Glass Manufacturers set up a factory, strangely enough) and south to Botany and the marshes that surrounded northern Botany Bay. Dredging commenced in 1887 to adapt Shea`s Creek to a canal, starting with a junction with the Cooks River, south-west of the existing Sydenham-to-Botany railway bridge. It extended north only so far as the Canal Road Bridge - and had to be re-aligned somewhat as the airport expanded.

However plans were afoot to extend to Buckland Street, Redfern - which would have been interesting indeed, had it happened. Apparently that extension only got as far as Huntley Street, Alexandria (in about 1897) before political will died away. We all know what that's like.

Other interesting bits from that URL above:
So what went wrong? Apparently it quickly became a `white elephant`as it required constant dredging and repair, at considerable expense, but was generating little commercial use or income. It was also limited by the shallow draught of the vessels that could use it, as well as tidal flows that required careful timing of use. Of course another factor was the growing success of commercial road transport in the 1930s. By the early 1940s it was decided to demolish the wharves. It was largely disused from the 1950s onwards.

Enough about the canal, what of the Airport? Again drawing heaving from that link, but with my observations added, the airport was significantly expanded from 1947. The airport land was expanded to include much of what had been Sydney's water supply reservation (near the old Mill Pond, ie the south-east corner of the field, now variously helicopter and car parking as well as roadway) as well as former Rockdale Sewage Farm land (near Muddy Creek), the F. T. Wimble and Co. Ltd Ink Factory (unsure where that was), the Mascot Granite Works (or that) and the whole of the suburb of Lauriston Park (which of course is pretty much the core street scape of the "domestic" terminal area - severed from surrounding suburbs by the Botany Goods railway line.

Much of the "new" east-west (07/25) runway was constructed along the centre of the existing Cooks River, requiring a major diversion. The diverted river was placed on the western boundary of the airport, with a hard turm to the south instead of a gentle meander across the airfield. Whereas it once flowed out to the Bay near the Mill Pond, it now exited next to what became the site of the 1970s Control Tower. Some houses in that area were also marooned when the river moved.

The excavated material and sand went to the aerodrome to raise the level of the runways and to fill the old Cooks River alignment. You can see a swampy area created by the removal of the river in maps and photos of the time, to the north of the intersection of the 2 main runways. Later, after the new runways were operating, the Alexandra Canal south of the railway bridge, including a surviving stretch of what was the Cooks River, were realigned, the original Canal and riverbed filled and a new channel cut through further to the west. This work created some more space for airport buildings to the north, including the international terminal, and was complete to my recollection by 1969. A new road bridge over the Canal was built during construction of the terminal, later becoming restricted to pedestrian and cycle traffic only. That of course was my favoured way to get to the International Terminal - a bus to Tempe bus (formerly tram) depot, then a stroll over the old construction bridge to the new terminal.

Also in this general area is a rail/tram interchange at Arncliffe, from whence ballast and sand was also transported across the tram network. Just thought you should know that.
Posted by gtveloce at 3:24 AM No comments: