The ramp from bridge to tunnel

The Sydney Harbour bridge carries train (and bicycle) traffic on its western side. This is a shot of a mixed suburban electric set on the ramp from bridge to tunnel, just short of the tunnel itself. Next stop Wynyard station.

What is less well known is that the eastern side was designed for the same purpose, but for a heavy rail line that was never built. The line would have gone from Wynyard to the northern beaches, however the tide of public opinion (or perhaps political will) turned against infrastructure investment and plans for the line were filed away. However a somewhat less costly option was taken up: trams. As Sydney had an extensive tramway network on both sides of the harbour, it made sense to connect the 2 'halves' as it were and thereby avoid avoid maintenance facility duplication, tram/rail interchanges or even truck transport, whilst also providing a service to commuters.

Of course this impacted ferry use, but not as much as a heavy rail line would have. Manly's tram network was an isolated one, cut at the Spit, so whilst some commuters would not mind a short (mostly covered) walk over the Spit bridge, many more would still choose the ferry.

So the compromise bought a cheaper but less useful light-rail line but at the price of a 'proper' straight-through heavy rail line. A compromise that may still have paid dividends today, except we tore up the tram system by 1961.  Which leaves us with buses and extra roadlanes on the bridge.

The tramline (whilst it lasted) paralleled the rail in many ways, with a tunnel to platforms at Wynyard (now deserted and partially used as car parking), a station at the Milson's Point side and a flyover bridge to North Sydney. The approach to that bridge is used (again) as car parking .

Posted by gtveloce at 4:26 AM No comments:

So what disappeared? The Manly line went. Narrabeen went as well. Parramatta to Rosehill and Parramatta to Castle Hill, gone. Sutherland to Cronulla, gone. Kogarah to Sans Souci, gone. Rockdale to Brighton, gone.

And then in 1961 we pulled the plug on the whole Sydney system.

Whilst we may blame our current governments for lack of investment in public infrastructure we must remember that this "trend" really dates back some 50 years or more. And it's hard to turn these things around.

So how did it happen? After the mad rush to build infrastucture and create a backbone for Sydney's development a few sums were quietly done. Whilst many tram lines were opened to win political favour as well as to profit developers, the actual patronage revealed was quite poor on the outer lines, whilst costs were absurdly high. These outer suburban lines were also isolated from the main network or were using outdated technology. So the low-hanging fruit (as we say) was plucked - the worst returns in the least politically sensitive areas went first. Light and heavy rail plans were quietly scrapped (like heavy rail to the northern beaches), scaled back or slowed down (like the eastern suburbs railway) and investment switched to cheaper, more flexible but oil-dependent buses instead.

Of course buses use roads, and cars also need roads. So it all seemed to make sense in a world of cheap oil and post-war wealth. People liked cars after all. And it benefited the increasingly important - and powerful - automobile industry. It seems amazing that the trams stopped less than 50 years ago - and that here we are now facing a growing shortage of public transport infrastructure, in a world where trams could have played a wonderfully effective role.

Posted by gtveloce at 6:41 AM No comments: Golf Mk1 rally car CT 1979_579
Originally uploaded by gtveloce
In the '70s we could even start car rallies from the roof of a major suburban shopping centre. Imagine that.
Posted by gtveloce at 5:17 AM No comments:

You wanna see a tram network? THIS is a tram network... alas it's all gone, bar one newish and oh-so-short light rail system that runs briefly over some of the same territory.
Posted by gtveloce at 4:48 AM No comments:

It's list time again! (Updated several times now, including fresh links. Note also multiple posts on some of these airfields. Use Ctrl-F to search the list.)

Apologies for the broken links. My domain name was 'pinched' when I wasn't looking! Please use the search box until I fix it (sadly it will take a long time).

There is also an excellent heritage study available from NSW Environment and Heritage on the subject of "World War II Aerodromes and Associated Structures in NSW". It's well worth a look.

Did you blink and miss racing at Amaroo? I was lucky enough to drive the track a few times and can confirm that this is an awesome recreation.. just add terror as you crest the hill at around 160kmh (in a road car) approaching the Loop... ever so slightly sideways.

Obviously the track was intact in 2000... eight years later and there are significant washaways and overgrown sections. Frankly I wouldn't want to run a lapdash on such a narrow circuit with so few run-off options...

Catalina Park Rallycross Track in the '70's... and now

Interesting set of stills showing Catalina then and now...

Generalisations are a funny thing, and here are 4: humans are (a) attracted by and somewhat fond of following tracks and paths; (b) competitive critters who like playing "chasings"; (c) social animals that like to gather in mobs around a focal point; and (d) quite happy to sit in those "mobs" just watching other humans playing chasings, often for hours at a time.

I could also add 2 geeky addenda, that (a) humans like to document what the other humans are doing, even if they don't do it themselves; and (b) humans like lists of stuff.

Do you see where this is heading?

Now I'll miss a few I'm sure, but for the record here's my take on a list of Sydney's race tracks, especially focused on those that hosted documented races of the wheeled variety but also ponies and horses, greyhounds or whatever springs to mind... in no particular order! (Use Ctrl-F to find or just read the lot.) It's a bit out of Sydney but hey, this is part of Sydney's history too. There was a zig-zag section on both sides of the Blue Mountains in the 19th Century. Whilst this was slow - it required engines to stop, decouple and 'run around' to drive the train up or down the next section, it was cheaper and easier to build at the time.

There was also a zig-zag railway at Thornleigh in Sydney that went from the station area down to a mine.
Posted by gtveloce at 7:55 AM No comments: Old and new lines_0035
Originally uploaded by gtveloce
A close up. You can also see the mining railway to Newnes on this map.
Posted by gtveloce at 7:54 AM No comments: Old and new lines_0034
Originally uploaded by gtveloce
It's a bit out of Sydney but hey, this is part of Sydney's history too. There was a zig-zag section on both sides of the Blue Mountains in the 19th Century. Whilst this was slow - it required engines to stop, decouple and 'run around' to drive the train up or down the next section, it was cheaper and easier to build at the time.

There was also a zig-zag railway at Thornleigh in Sydney that went from the station area down to a mine.
Posted by gtveloce at 7:53 AM No comments: Catalina Park_0052
Originally uploaded by gtveloce
I love these old tracks... disused, derelict but full of memories. Alas this track was built over an aboriginal site of significance, and motor racing is not in keeping with the National Park ethos of the area. Check out the wooden guard rails...
Posted by gtveloce at 7:46 AM No comments: Catalina Park lake_0046
Originally uploaded by gtveloce
Technically it's west of Sydney, but it's so close and so much a part of Sydney life that it gets a guernsey here.

Would you believe this was originallly a privately-funded amusement park with an ornamental (and actual bathing) lake? Later to include a Catalina flying boat (in the centre of the lake, hence the name) that was presumably trucked in?

Later still (around 1950) a motor racing circuit was built around the edge of what was known as "the Gully" north and west of this shot, to the dismay of residents, many indigenous. Thousands of years of aboriginal Australian culture was disturbed or destroyed in the process of creating a track for car racing. Great work, guys. Mind you, that was how things were done - with fewer regulations, less concern for the past (or for safety!) and a very different understanding of our shared history, development just "happened" and the consequences were dealt with much later. Sadly we all pay for this loss of history; even motor sport pays the price because they lose a track that, if better placed, could have remained viable.

Mind you, if you take a walk around the old track you can't help but be amazed. It's still walkable, even rideable by bicycle. In many places it's walled by wooden safety railings with little or no safety run offs for cars. 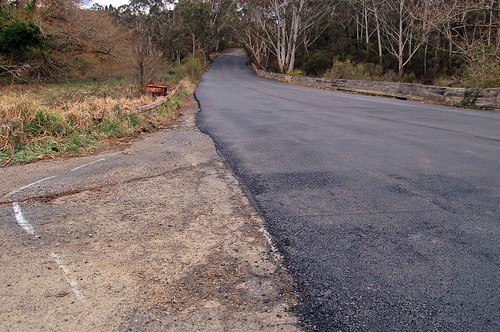 It was still in occasional use when I was lap-dashing with a car club in the early '80s and whilst I didn't give it a go myself I can say that margin for error was close to zero. Brave. Dangerous. Exciting. Take your pick. The inner mudbath/dust bowl was also used for rally cross. 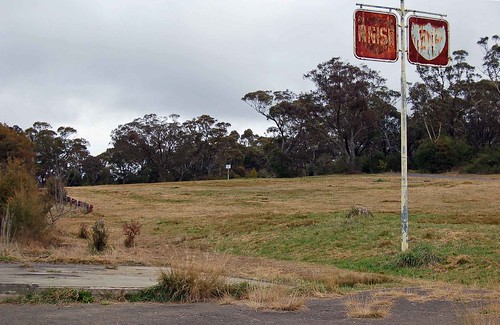 A shale and coal railway line also passed on the western edge of the park, providing a link from the main railway on the plateau down to the mines in the beautiful, otherwise unspoilt valleys. That was the 19th century in action I guess.

More info and another pic here.