Recent speculation has suggested that Badgery's Creek, supposedly to be the "2nd" Sydney airport, should be named after the engineer Bradfield (a stretch, surely) or (more appropriately) the aviation pioneer Lawrence Hargrave. Well, yes, sure - but this is neither the "2nd" airport for Sydney nor would it be the first time that the name "Hargrave" has been attached to an airfield in Sydney. Not that it was necessarily named for that particular Hargrave, mind.

Hargrave Park, Liverpool, an historic airfield (circa 1930s) now part of the residential suburb of Warwick Farm. Airfield closed circa 1945 with operations reportedly moved to Camden. Was used for public housing thereafter with complaints about squalor.

Location is west of Warwick Farm, north of Liverpool. 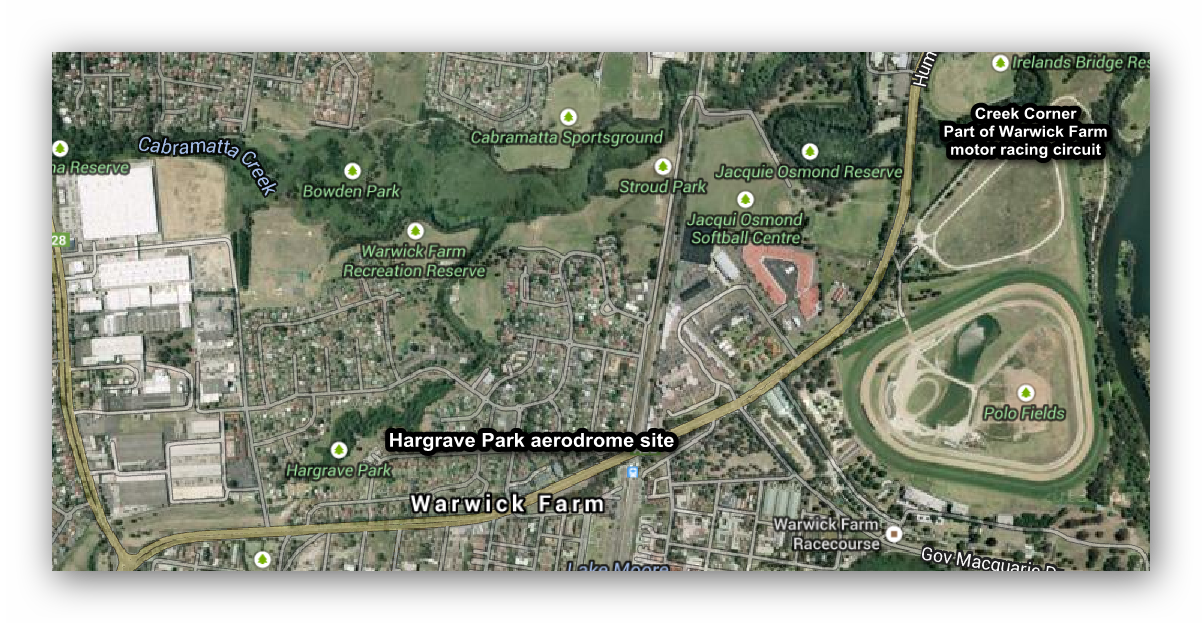 In the late 1920's the Royal Aero Club (then Australian Aero Club (New South Wales Section)) bought land at Hargrave Park. The Aero Club's purchase was noted in the Sydney Morning Herald: "Over 70 acres of land acquired by the club had been cleared, and excellent landing grounds and runways provided. Fences, turnstiles, nnd temporary offices were now about to be erected in readiness for the club pageant to be held on September 20" (SMH, 21 July, 1930).


The Aero Club announced the Hargrave Park aerodrome opening with an aerial display, September, 1930. "Mr E B Wilshire vice president and honorary architect of the club is now abroad collecting information regarding aerodrome construction. It is expected that when his recommendations are put into effect the club will have one of the most up-to date club aerodromes in the world. Provision is being made at Hargrave Park for a residential country club with an l8 holes championship golf course.  Mr Eric Apperley's design for the course will shortly be available. On the completion of the works now in hand there will be available runs of 675 yards in a north-south direction, 750 yards in a north-east south-west direction and 700 yards in an east-west direction and 650 yards in a north-west, south-east direction. These will be increased when arrangements have been completed for the lowering and removal of telephone and power lines on the eastern and southern boundaries."

A report on the pageant is in Trove.

Many well-known pilots, such as Sir Charles Kingsford-Smith and Charles Ulm used to fly to this airstrip. The aerodrome was taken over during World War II and its activities transferred to Camden.

"Hinkler Ave" remains as a testament to the aviation history of this site.

Warwick Farm the suburb was named after the town of Warwick in England by John Hawley Stroud,  superintendent of the Liverpool Orphans School. Stroud's land grant covered the site of the Warwick Farm racecourse and surrounds. Stroud gave the name to his farm and it was later extended by popular use to the larger area.

Warwick Farm racecourse itself came into being as a result of many farms in the area breeding horses; subsequently a course was created to race them with the first race meeting held c.1889. Motor sport was also held there 1960-1973 with the motor racing track cutting across the horse racing track to attain its full "grand prix" circuit length. Although racing ceased in 1973 some lengths of the track remained in use, including "Creek corner", for advanced driver training. I was lucky enough to drive that section c.1978. Like another now-closed circuit, Catalina Park at Katoomba, it was surprisingly narrow with little "over-run" if a corner was missed.

During WW II huts were built, possibly on higher ground west of the racecourse, creating the British Royal Navy shore base HMS Golden Hind, or "Camp Warwick". After the war the huts were used as emergency accommodation and named "Hargrave Park".

Wikipedia says this: "After arriving in Sydney on 20 December 1944, the personnel set up at Warwick Farm racecourse, which had been converted into Camp Warwick, a part of HMS Golden Hind, the Royal Navy barracks in Sydney. Upon Suffolk '​s arrival at Sydney on 24 December 1944, Royal Australian Air Force personnel from No. 1 Transportation & Movements began unloading the stores and equipment for transport to RAAF Nowra, which was officially transferred to the Royal Navy on a loan basis and commissioned as HMS Nabbington, Royal Naval Air Station Nowra, on 2 January 1945. Some improvements and expansion were required in order to make the base operational, and these were undertaken during January 1945."


Following closure post-WWII the Hargrave Park land, thought to be the higher ground west of the race course, was used for public housing. But not your regular housing commission accommodation, this was of a standard well below that. This Sydney Morning Herald report of 19th February, 1953 paints a bleak picture:

Hargrave Park, near Liverpool, which now houses 950 families aggregating about 4,500 people, was a Royal Naval barracks during World War II. The settlement is a curious mixture of army huts and fac- tories. Several firms have annexe factories in the settlement, although at present only one which manufactures farm machinery and is situated alongside the main gate is operating.

A few huts have been converted into shops, but the majority has been subdivided with flimsy partitions into what are euphemistically called "flats." Some of these flats consist of a living-room-cum-kitchen, two bedrooms and a bathroom, and some have three bedrooms. The bath is of galvanised iron and has a chip-heater for warm ing water. The shower is attached to the cold-water service only. The kitchen, sink is also galvanised iron, and the draining board is prefabricated wallboard.

The flats are fitted with fuel stoves which are chiefly noted for their insatiable appetite for wood. (One inhabitant claims that his rent costs him £1 a week and his wood £1/8/.) Some of the huts are "lined." That is, the corrugated iron has been covered inside with wall boards and a ceiling fitted. Most, however, only have wall boards about five feet up the interior walls and no ceilings. The electric light fittings are attached to the roof beams.

The entire camp is surrounded by a "star picket" fence, and intricately laced barbed-wire entanglements - a relic of the navy days. Some inhabitants have tried to brighten up their drab surroundings by attaching "gardens" to their flats and growing vegetables and (occasionally) flowers.

The multiplicity of materials used to improvise fences around such gardens robs them of any pretensions to beauty which they might have. But the fences have a more practical motive, which was explained by Mrs. Keith Davis, who has raised thirteen tomato plants and a row of beans inside her 'garden'. "The fences keep the cows and horses from turning over the rubbish-tin at night," she said. 'There is a mob of horses and cows which comes in at night and turns over the tins and goes through the garbage. Mr. Evatt should come over about 6 a.m. if he wants to see conditions here."


The most impressive feature of Hargrave Park is its mud. This comes chiefly in a dark-red shade and is renowned for its glutinous qualities. As roofs on the huts do not have guttering, rainwater falling on the ground alongside each hut soon wears an elongated puddle the length of the hut. Despite the daily garbage collection there is a lot of litter around the outskirts. The inhabitants must take much of the blame for this. In some places fowls have been plucked and rubbish dumped in heaps and burned. Remains of the latter are seen in several heaps of burned out and rusted tin cans. The creek which meanders through the settlement is mostly dry in the summer. This creek has taken some blame from inhabitants for the recent sickness in the area. They say that sewage was diverted through it when a sewer pipe became blocked.

There was little water in the creek yesterday, but what there was appeared to have a thick scum on it,
The communal laundries (six or eight flats to each) are mostly in a state of disrepair but the inhabitants must also take the blame for most of this damage. The fibro roofs have not stood up to the exploratory tendencies of the more adventurous children, and several laundries have whole doors missing or only the remnants of doors remaining'. This is possibly due to the fact that the coppers are fired by fuel, and the doors of wood. Most of the families say they have given up trying to make something of life in the settlement. "Every time the children go out the door they are filthy five minutes later," said one woman. "We have been forced to live like this and we just don't care any more."

Not enough detail? There's a book about the suburb, too, by Beverley Donald ('Hargrave Park? Never Heard of It'): "The story of Hargrave Park starts in County Wicklow Ireland in 1798 with five Irish rebels who came out to Sydney as exiles in 1806 and were granted 100 acres each along Cabramatta Creek.  This book tells of their time here and what happened to the land after they left it.  It recounts the story of the short-lived Hargrave Air Park, the US Army base, the Golden Hind Royal Naval depot and the emergency housing settlement set up after the Navy left. The last chapter brings the story up-to-date, with glimpses of life in the Hargrave Park section of Warwick Farm." via Casula Powerhouse.

As a history buff, let me just say that I love the way that you're exposing the different suburbs in Sydney and the rest of Australian. It's truly enlightening to hear these tales pulled out from storage about places that are so familiar!

Thanks for the comment, Edward. I'm glad you enjoy the site!

Wow, I remember Hargrave Park. I was 13 and lived at Cabramatta Hostel. We used to go to the creek and the kids from Hargrave were on the other side. We used to yell at each other and throw stones and lots of name calling. Once we even ventured over to the Other side, I remember clearly thinking then that Cabramatta Hostel was so much better. Nothing mentioned on Liverpool Councils Web Site about Hargrave Park. I also remember some friends of my parents left the Hostel and could not manage and tried to come back to the Cabramatta Hostel by this stage we were living in Burwood, that poor family were sent to Hargrave Park to live to wait for housing at Green Valley.

Thanks for adding your interesting recollections, Katherine!

I spent 18 months at Hargrave Park in the early fifties. My recollections are that the school and teachers were fantastic, we had boxing for a sport every Friday (you were on the card if you were caught fighting in the playground). I think because everybody was in the same boat there seemed not to be any social strata and it seemed to work well. I don't regret the time I spent there though my parents may have had a different view.

Although I was only 4 years old at the time in the the late 1950s and lived at Hargrave Parkes I have pleasant memories. I now live in Qld

I lived there for about 2 years and attended the primary school our neighbours were the Cartwright and the Hardies. I remember the mud throwing fights with the Cabramatta mob and the huge bonfires on what was then Empire Night with crackers and drunk dad's.
I still have a school photo but can only remember my school wagging mate Patrick Kelly. I'm 74 now and the memory's failing. We got a housing commission house at Yagoona West, and suddenly I was at a new school with new friends.

Many thanks for these comments! Great to tap into real memories of the place :)