Newcastle is the northern-most end of the Sydney "conurbation" so I'll include it in my ramblings - plus it's relatively close-by to me and interesting. Newcastle had trams, like Sydney, and an airport close to its heart. Alas, a few near-misses and crashes plus the encroachment of housing saw the end of this convenient strip in 1963.

Where was it? District Park, Broadmeadow. Yep, right next to the railway. Perfect spot, really. Except for the houses. And the crashes, mostly during the 1940s. Famously a C47 over-ran the strip in bad weather and ended in the stormwater drain, and a Bristol Beaufort ended up breaching the fence. A USAF A20 Havoc (AKA Boston) also ended up nose-down on Lambton Rd.

Here's a Google Earth shot of it, as it is now, overlaid with an old black-and-white shot of the field, date unknown but I'm guessing it was 1940 or so: 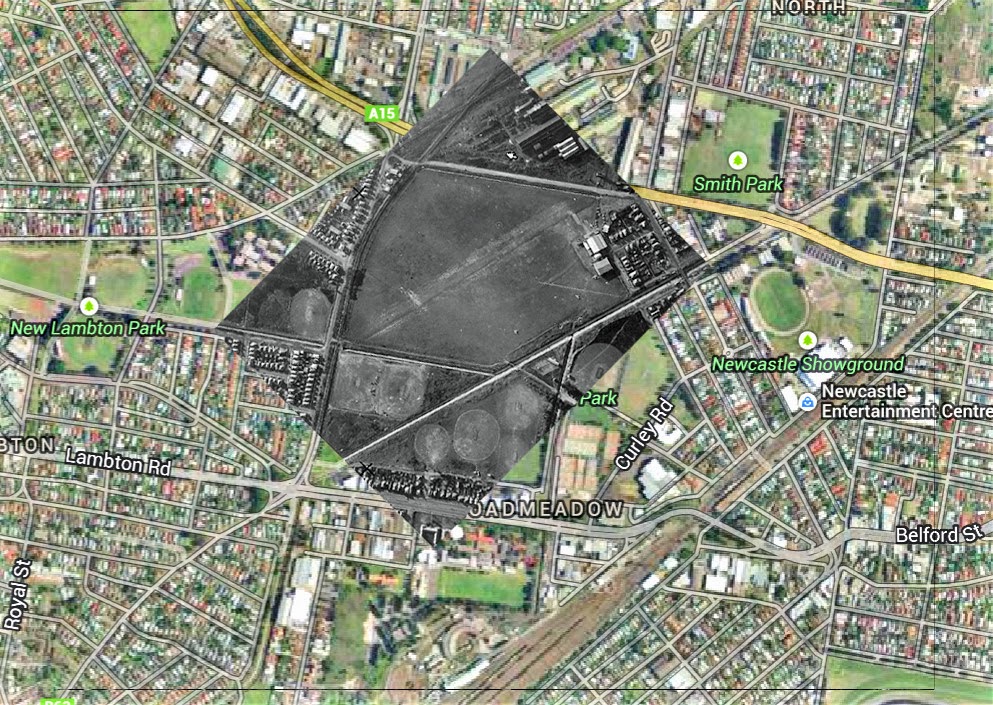 If you look closely the trams ran along the right-hand (eastern) side of the field (ie Broadmeadow Rd) before crossing in reserved track along what is now Curley Rd and then Lambton Rd (southern end of the image), The tram line then went along Hobart Rd.

Can't resist this velodrome, can we? Camperdown!


Camperdown Velodrome is now gone. It's O'Dea Reserve, if you want to look it up.

From a "lost Sydney" perspective we have lost a velodrome, and before that we lost a brick pit, a tip and some factory waste. Before that the original custodians of the land lost their say in all of this, alas.

But anyway, you can search the Marrickville council records on this but in brief the enormous saucer (440m?) that was the 1938 Commonwealth Games velodrome (also lost!) at Henson Park, Marrickville was closed in the late 60s or thereabouts (check that, someone!) and the Dulwich Hill cycling club was assisted by council to move to a purpose-built if somewhat dicey and much smaller (250m) concrete track with proper banking.

It was bumpy, it had little or no curving between track and duckboard but it was proper!

FWIW I last rode the Henson Park track in about 1976, I think, before it was removed and replaced by impressively-bright TV-quality RL footy club floodlights for the benefit of the Newtown 'Bluebags'. Yes, we soon effectively lost the Bluebags as well, or at least lost them from first grade.

Alas the toxic waste fill was seeping out and council closed and remediated the Camperdown site. The cycling club moved to Tempe velodrome, a slightly bigger (330m?) but less scary beast, and Camperdown was left to rot for a while. And now it's gone.


My list of Sydney's race tracks and circuits.
or checkout my list of Sydney and surrounding airstrips and airports.
Posted by gtveloce at 7:33 AM No comments: