It seems that there is some confusion over both Gumbramorra swamp and creek - where they were being the key question, both Marrickville and Sydenham being the alternative and competing "correct" answers.  Some documentation clearly indicates that Sydenham is the preferred and most likely primary location but there's no doubt that another related, indeed connected swamp, one that inevitably fed into Gumbramorra, existed around Addison Road, Marrickville. As they were connected, most likely they could be considered "part of the Gumbramorra system" and most maps show this to be so. However it is also possible that in drier years the connection dried up, isolating the upper, Addison Road swamp. As it interests me, mainly 'cause I grew up in the area, I've gone into a bit more depth with this post. Wherever possible I have given credit for previous work. Where uncredited it's most likely just my opinion!

Anyway... firstly, what does Gumbramorra mean? I still don't have an answer to that!

OK, disappointing - but maybe someone will chip in one day and answer that one.

So, secondly, where do I think it was? I've written a detailed post on this already (drawing heavily on Chrys Meader's work, see that post for details) but in short it was hemmed in by foothills and escarpments to the north, east and northwest. That's incontrovertible, based on topography. It extended from the Cooks River mudflats and saltmarsh of Tempe, where the Gumbramorra Creek joined the Cooks River in the south, to a north-western extent along what is now Sydenham Rd. It possibly at its greatest extent reached west to Livingstone Road (both Sydenham and Petersham Roads were once and variously known as Swamp Road, so it likely extended some distance) but must have narrowed considerably as it expanded west. The northern and western edge was blocked by the rising land to the north, including that along Illawarra Road, forcing the swamp to form an edge at Sydenham Road around to Victoria Rd, and probably northwards as far as Enmore Park. That flat, easily flooded area to the south and east of today's Victoria Road is now industrial land and lies at the core of the swamp. Partly, to the south, it was once the location of the tragically flooded estate of Tramvale (1889).

The Addison Road swamp is a little higher and to the north and west of that, although it clearly doesn't take much imagination to see the two systems merging in wetter years. The Addison Road swamp visibly lies in a depression between two ridges, draining to the east at, around, or just to the south of Enmore Park. Whether the Addison Road swamp was permanently connected to Gumbramorra Swamp is possible, if unlikely. More likely the connection dried up periodically. They are certainly connected, related systems, obviously so during the wetter years and seasons. But it's a stretch to say that Gumbramorra Creek itself flowed through (or under, if you like) the current community centre (as has been claimed). It was a swamp, it didn't really "flow" but it drained slowly to the east. In any case Gumbramorra Creek lies to the south of the primary swamp in that narrowing around Carrington Road and clearly emptied into saltmarsh and mudflats at Cooks River. It's then a question of where to put the headwaters and to name any feeder creeks - to the north, northwest or west. And I have no definitive answer on that!

Anyway, Marrickville Council has had a stab at mapping it (reference 4. below), with attribution as an adaptation of Benson et al (1999).. 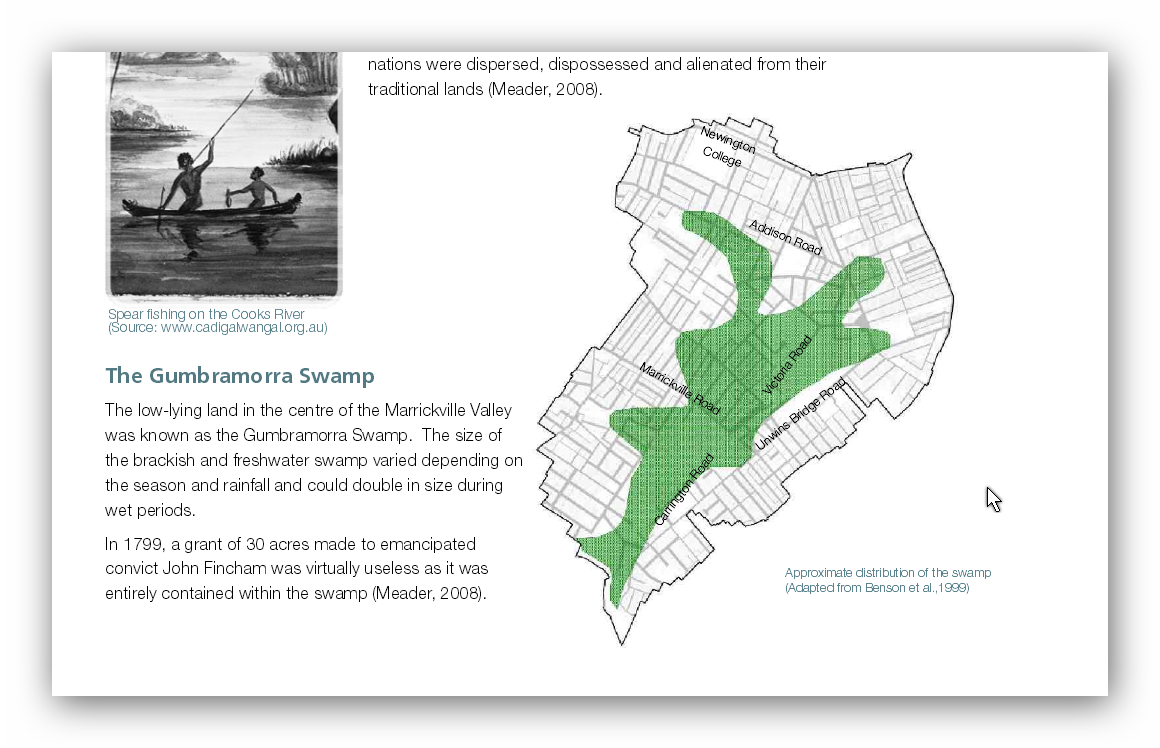 Whilst I tend to agree, it's worth noting that (as mentioned on the image above) the swamp could "double in size". Most likely it would expand along the path of current Sydenham Road and also north east towards St Peters. It should be remembered that it drains to the south, if somewhat slowly due to the narrowing egress, and that the topography further suggests that the core swamp is centred west and north of Sydenham. In a dry season or worse, a dry spell of years, the Addison Road swamp may well be cut off quite early on, being to the north of the primary swap. Similarly the narrowing to the south suggests also that the creek itself could slow or even stop, leaving the swamp in the main cut off from the Cooks River. We know it was tidal at the southern extreme, so salt water would have penetrated but would have been periodically flushed by fresh water rainfall. If Gumbramorra Creek were blocked after a dry spell then a sudden, drought-breaking deluge could well force the swamp to "back up" quite a distance before forcing itself to reopen the creek.

Which is all well and good - it would have been a wonderful system for wildlife - but today is little more than an interesting set of concrete-lined drains, historic pumping stations and a massive (often empty) outflow pond ('Sydenham Storage Pit'). As well as losing this swamp, we also lost the marshes at Mascot, in an impressive feat of drainage and, ultimately, destruction. If that's progress, can we at least learn from it and leave (or restore?) a bit more of the natural world in our over-built urban environment, please?

Some references and further reading:
Apologies if any links are broken, my domain name was inadvertently "pinched". Please use the search box to find the article(s) in question. Thanks.

I've been informed that there's a recent book by Sue Castrique that is declarative in asserting that the 'Addison Road creek' fed Gumbramorra swamp, running through the current Addison Road Community Centre (i.e. the Army camp, or market garden/dairy land which was thought to be drained swamp rather than a clearly defined 'creek') and crossing Victoria Road near Smith Street. This is (apparently) evidenced by an open canal south of Smith Street. Whilst certainly 'in the ballpark', previous work has stressed the cyclically varying (ie ephemeral) yet largely swampy nature of both the Addison Rd swamp and the sometimes contiguous and often linked Gumbramorra swamp. Rather than being a creek bed, it may simply be a convenient place for draining swampy land to the northwest of the Sydenham basin. The the Eastern and Empire Lane stormwater channels (the 'northern catchment') are close by, running in part under Marrickville Metro and Sydney Steel Rd. It's possible that Smith Street is indeed a remnant watercourse from the northwest. I haven't read the book so I'm not sure what evidence backs the claim up. It may simply be one of several ephemeral creeks that ultimately fed Gumbramorra, and the alignment may or may not be the "main channel" as it were, or simply the centre of a semi-permanent swamp.