In my memory it's an airstrip marked on some 40's and even '50s Sydney street directories, well north of Penrith on the road between that city and Richmond. Later it became marked on maps as a dragstrip, before that too was closed and drag racing moved to Eastern Creek. 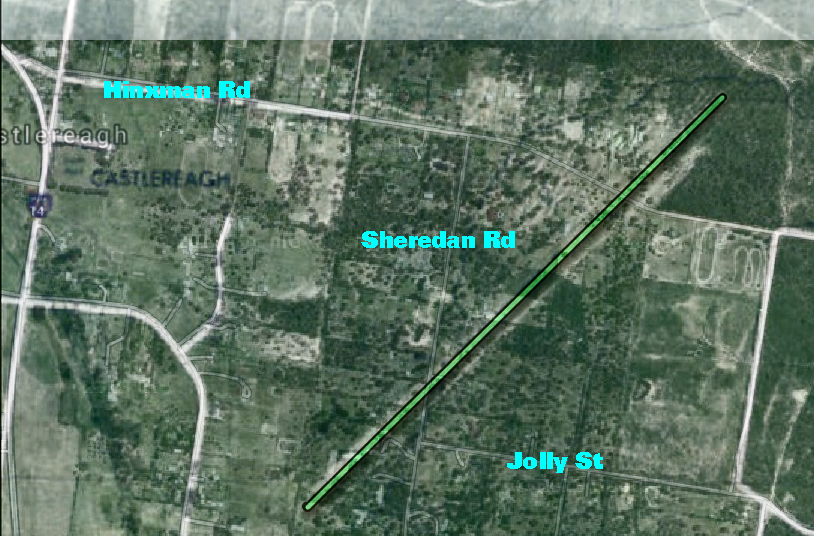 A composite map I made from Google Maps and Penrith City Council maps. It's approximate but pretty close (I think) to the airstrip alignment. If you view that location on a Google map you can see the faint outline of the airstrip on that south-west-north-east alignment.


According to Penrith City Council records drag racing was held on the site of the original Castlereagh Airstrip, used as an 'emergency strip' during the 1930s and during WWII (when it was a dispersal strip for RAAF Richmond). While drag racing had taken place as early as 1947, it wasn't until 1959, when the Australian Racing Drivers Club (ARDC) took over, that 'official' or organised racing began. This was the first recorded instance of "U.S.-style" dragsters racing in NSW. The 40 hectare area was leased from Walter Properties Pty Ltd, presumably the post-war owners of the airstrip land.

Subsequent to the ARDC's operations racing was also organised by the Manly-Warringah Sporting Car Club from 1962 to 1965. The NSW Hot Rod Association ran races here after that time.

The name of the track was changed to "Castlereagh International Dragway" c.1971 and racing continued until 1984, when the track was closed. An earlier threat occurred in 1982 when Penrith Council put in a development application to remove gravel from the land in Hinxman Road. However the council resubmitted its application excluding the drag strip from the application.

Closure came when the dragway lease on at least part of the land owned by Walters Properties expired in April 1984. The owners chose not to renew the lease, instead entering into a joint venture with Oakes Building Co. to develop a total of 115 hectares into 54 five acre blocks. This was to be called the Castlecrest (or possibly Castlereagh) Country Estate.

Wikipedia's description: "Castlereagh Aerodrome was a Royal Australian Air Force (RAAF) emergency landing ground and dispersal ground during World War II at Castlereagh, New South Wales, Australia. The runway was 5,000 ft long (1,500 m) x 150 ft wide (46 m). The airfield was to become home to No. 94 Squadron's Mosquito aircraft and had been upgraded by No. 9 Airfield Construction Squadron, however the aircraft did not arrive before No. 94 Squadron was relocated to RAAF Base Richmond and disbanded. After disposal by the RAAF, the airfield was used as a drag strip from the early 1960s eventually closing in April 1984, becoming Castlereagh Country Estate."

OzAtWar says this: "Castlereagh airfield was used as an Emergency Landing Ground (ELG) during WW2. In 1947 the airfield was used as a drag strip. The Australian Racing Drivers Club took over in 1959 and it was from this time that US style dragsters were raced in New South Wales for the first time. The Manly Warringah Sporting Club managed the complex from 1962 through to 1965. The NSW Hot Rod Association then took over. It became known as the Castlereagh International Dragway in 1971. The drag track eventually closed in April 1984. The area then became part of the 115 hectare Castlereagh Country Estate comprising 54 five acre blocks. The north western end of the Castlereagh airfield started east of the southern end of West Wilchard Road and ran north east up to Hinxman Road. It crossed Sheredan Road near the intersection with Jolly Street."