Where Qantas hid its DC4 fleet QF DC4 EDB Sydney 75_245, a photo by gtveloce on Flickr.
It must have been a tad embarrassing as well as expensive (and arguably romantic, in a way) for Qantas to have to maintain such old aircraft well into the jet age.

Between trips to Norfolk Island's short grass strip the old birds were maintained in the hangars furthest from any passenger terminal but plainly visible to anyone driving from the domestic terminals to the "new" international terminal on the far side of the airfield. It was semi-hidden but by far the most interesting part of Sydney Airport in the 1970s...
Posted by gtveloce at 3:11 AM No comments: QF DC4 1977_229, a photo by gtveloce on Flickr.
Perhaps even more surprising than seeing big 4-engined turbo-prop L188 Electras flying into Sydney Airport in the 1970s was seeing (and hearing!) these 4-engined piston and prop-driven Douglas DC4 airliners in regular service from Sydney to Norfolk island!

They would often appear on the distant horizon to the east and north of where I was at Marrickville and lumber their way onto a short final approach to runway 16, making a left turn late over Sydenham. Presumably they were a slow-moving nuisance for the faster jets and were "hurried up" by air traffic control.
Posted by gtveloce at 3:03 AM No comments: Ansett L188 Electra 76_918, a photo by gtveloce on Flickr.
Excuse the blur but it was hand-held after dusk!! Point is that it's an L188 Electra, one-time workhorse for TAA and Ansett, forced to serve out its days carrying cargo at night. Sydney then (as now) had a curfew on jets so "quieter" prop-driven aircraft did the night-time shifts. It extended the life of this Ansett Electra, which was retired from passenger duties in the early 1970s.

I remember both TAA and Ansett Electras swooping in from the south, joining the 16 approach quite late, over Marrickville or even Sydenham in order to 'nip in' before a bigger jet. They often soared over my head, one following the other in the 2-airline parallel timetable days.

This particular shot was taken in 1976, close to final retirement from the fleet.
Posted by gtveloce at 2:54 AM No comments: 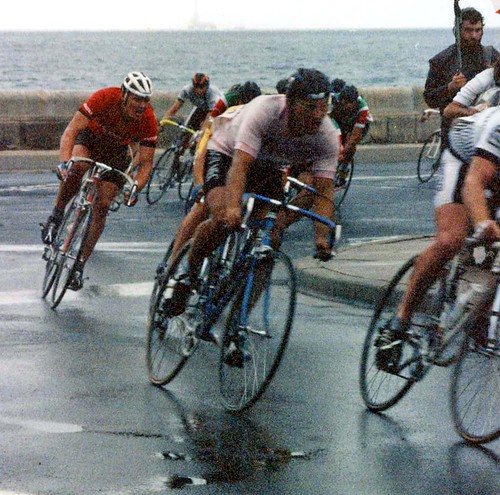 Coogee Crit 1987_040, a photo by gtveloce on Flickr.
Well I think it was '87. It's the Coogee crit stage of the Bank Race, anyway, which held criteriums and road stages in and between various towns in Queensland and NSW. Some promising guy named Jan Ullrich won it overall one year...


My list of Sydney's race tracks and circuits.
or checkout my list of Sydney and surrounding airstrips and airports.
Posted by gtveloce at 2:29 AM No comments:

Austin in a Marrickville Street circa 1948 Austin 02, a photo by gtveloce on Flickr.
Snazzy Austin caught in a Marrickville Street around 1948 or thereabouts.
Posted by gtveloce at 2:22 AM No comments: