Canals and all that - Hawthorne and Alexandra

I've written about the Alexandra canal before, but perhaps haven't mentioned the Hawthorne canal. I should.

To firstly recap, Sydney's canals were essentially redeveloped creeks, dredged and widened. They were often efforts firstly to solve a stormwater or pollution problem, such as sewage in the case of the Hawthorne canal and tannery and other light industry by-products in the case of Alexandra canal. They often drained swamps and managed flooding - from a 19th Century perspective, anyway - but were put to other uses when they could.

Engineer H B Henson had much to do with the big picture canal planning of the late 19th Century. Or at least in inspiring some of it.

Henson proposed to flush the Cooks River and Botany Bay by removing the dam and weir that held back the Cooks near Tempe. Those obstacles prevented tidal flushing from the bay and encouraged silt deposition. (Henson may have been related to a later Mayor of Marrickville, William Henson, after whom Henson Park is named. Or perhaps to a number of other Hensons, also prominent Sydney Council aldermen at the time or just after.)

After removing the blockages, something that indeed mostly happened, Henson proposed the construction of a canal and tunnel from the Parramatta River south via Long Cove Creek (which partly became the Hawthorne canal), Ashfield, Dulwich Hill (parallel to Garnet Street) and into Cooks River.

Ultimately Henson's plan called for the Long Cove canal to join with the river that emptied into Homebush Bay via a canal through Strathfield to somewhere near Chullora (where there were significant railway yards), but this was only partly built. Checkout the course of the Duck River to see how far that idea got.

The Alexandra canal follows the former course of Shea's Creek in south-eastern Sydney. It starts today to the north-west of Botany Bay near Sydney Airport's international terminal, at the intersection with the Cooks River, and ends 200 metres south of Huntley Street in Alexandria.You can read about it in detail at Sydney Water's heritage page. Wikipedia is another useful source.

Of course Sydney Airport's growth interfered with its course, as swamps were drained and the Cooks River literally moved. The canal originally started south-west of the existing Sydenham to Botany Railway Bridge and extended to the Canal Road Bridge. With some walking and map-reading you can see the odd remnant or piece it together with some imagination.It was meant to be part of a larger scheme to link with Sydney Harbour. But the late 19th Century civic planners were trying many ideas, and only some of them proved useful.

Anyway, the canal builders were inspired by successful canals in the UK and other parts, and pressed on with construction, partly as an unemployment relief scheme. In 1894 the canal was to be extended to Buckland Street, Redfern but only got a short distance along that planned route. It was roughly at that point that the archaeologists were called in to consider the stone tools, dugong bones and other Aboriginal artefacts. This mattered, as it indicated where the Aboriginal peoples of Sydney lived, what they ate and something about where water levels once were. Plus the dugong is no longer found so far south, so the bones were a surprise.

Along the canal were wharves, and although local industry made use of them, canal use never really took off and road transport proved too competitive. Given the cost of removing the buildup of silt, it was never even at break-even point. And it gradually fell into disuse.

The Hawthorne or Long Cove canal was another late 19th Century canal built in the Ashfield/Haberfield area, running along the course of Long Cove creek, with the navigable section terminating at a wharf at Marion Street. Wikipedia is again a useful source. Although ferry services were run along the then navigable canal for a brief period, siltation was again a problem. Coupled with the increasingly competitive tramway network, the ferry service stopped in 1904. 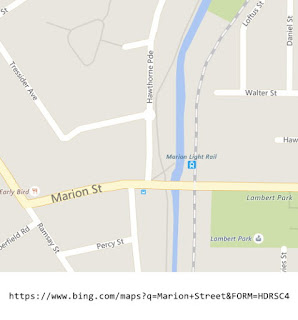 From the Marion Street terminus down to Long Cove the canal is visible to the public and often lined with parkland. It is a wide stretch of canal and the navigability can be easily imagined. Upstream, particularly west of Parramatta Road the canal becomes more obviously a storm-water channel, often becoming somewhat hidden or even underground. It is visible again at another of Sydney's hidden historical landmarks, the Lewisham viaduct. The route is accessible by light rail or car.

Another recent article on this subject may be found at the ABC site.

Posted by gtveloce at 1:14 AM No comments:

The race tracks of Sydney


My list of Sydney's race tracks and circuits.
or checkout my list of Sydney and surrounding airstrips and airports.
Posted by gtveloce at 1:30 AM No comments:

Remember the story of Harold Holt's disappearance? It was pretty dramatic at the time and a remarkable way to lose a Prime Minister. Either swept out to sea, or maybe to a foreign submarine? Eh?

Anyway, 58 Cavendish, Stanmore, is reputedly his birthplace. Which is pretty close to where I grew up in Marrickville. The parallels end there, I suspect.

And yes, Holt St intersects with Cavendish. There's a clue there, surely.

Posted by gtveloce at 6:04 AM No comments: