Well we call it Sydney Airport but really it's just one of many in the Sydney region. It's not the largest either but it is the "international" one, of course. And the one we first think of, unless you think of Bankstown or Richmond or Camden or whatever first.

It isn't - or wasn't - the Sydney international airport at Rose Bay, of course! 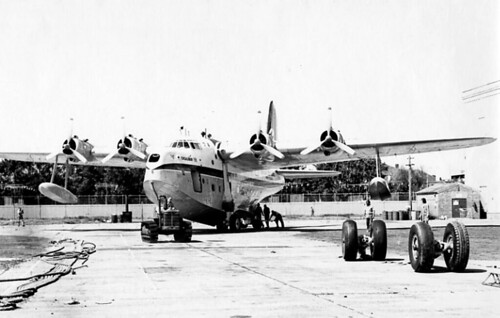 That one was at Rose Bay on Sydney Harbour.

No, we are looking a a land-based "airfield". Like Rose Bay it's historically important - not because it was Sydney's first aviation location or even "landing ground" but because it's relatively old and significant on several different levels. It has layers of history, with indigenous use, environmental importance, recreational use and major engineering works to commend it to our attention. We've even moved a river just to accommodate it. 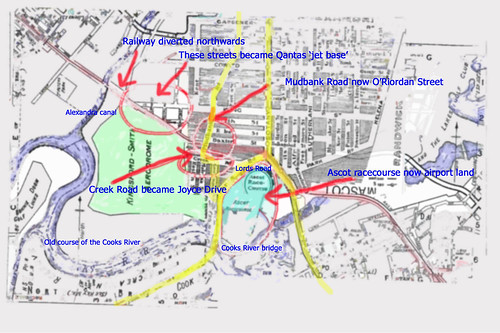 In short, Sydney "Kingsford-Smith" Airport at Mascot is one of the oldest continually operating airports in the world. In 1919, Nigel Love's Australian Aircraft and Engineering Company leased land from the Kensington Racing Club (adjacent to Ascot racecourse) and established an aerodrome. It was, basically, a swampy paddock. A flat, swampy paddock. With Cooks River to the west, some recreational grounds and Botany Bay to the south and Eastlakes swamp to the east.


As an aside, it was H. E. Broadsmith and Nigel Love who in 1919 established Australia's aircraft manufacturing industry, forming the Australian Aircraft and Engineering Company (AAEC) to  produce 6 AVRO 504K training biplanes for the R.A.A.F. and 7 for other customers. Broadsmith determined that Mountain Ash was the best local timber for manufacture to British Aeronautical specifications.

A canvas hangar was built and the first aircraft was assembled on site; the first flight taking place in November 1919 with the aforementioned Nigel Love in command. By the mid-1920s, regular air services between Sydney, Melbourne and Adelaide were underway and the Australian Federal Government had taken control of the airport. In the 1940s a passenger terminal was opened and the Cooks River diverted to allow for the construction of two new runways, including 07/25 as the "main" runway aligned east to west. 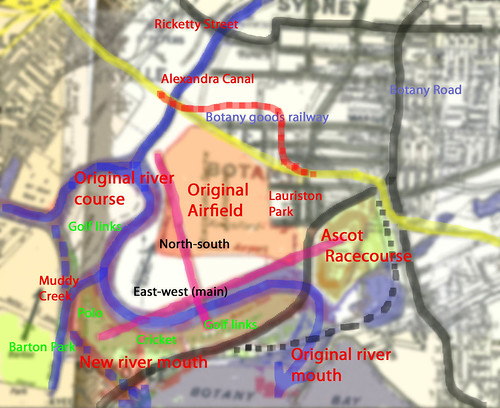 Both the suburb of "Lauriston Park" and the Ascot Racecourse, immediately to the east, were subsumed into the growing aerodrome. As shown in the map above, the main road south originally  split the racecourse and the aerodrome, with a tramline and a balloon loop to the north of the racecourse itself. As the airport grew the road south - and its bridge over the Cooks River - was diverted to the east. The Cooks River itself being diverted to the west.

During WWII Sydney hosted No 4 EFTS at Mascot, part of the Elementary Flying Training Schools (EFTS) scheme, later to be re-dedicated to Communications. 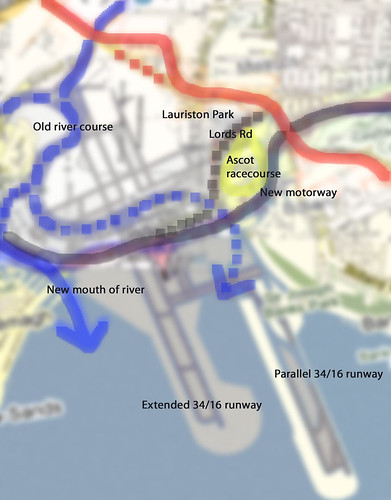 In 1989 a fairly close-spaced and slightly staggered parallel runway 34/16 was approved, being  completed in 1994 (making 3 operational runways).

After all of that investment the Australian Government then privatised - for better or for worse - Sydney Airport in 2002.

Not to be confused with Western Sydney Airport, not built but "planned".