Lost but not forgotten: RAAF Rathmines on Lake Macquarie

RAAF Rathmines on Lake Macquarie, south and west of Newcastle and north of Sydney and the Central Coast. A WWII "air base" with a difference! 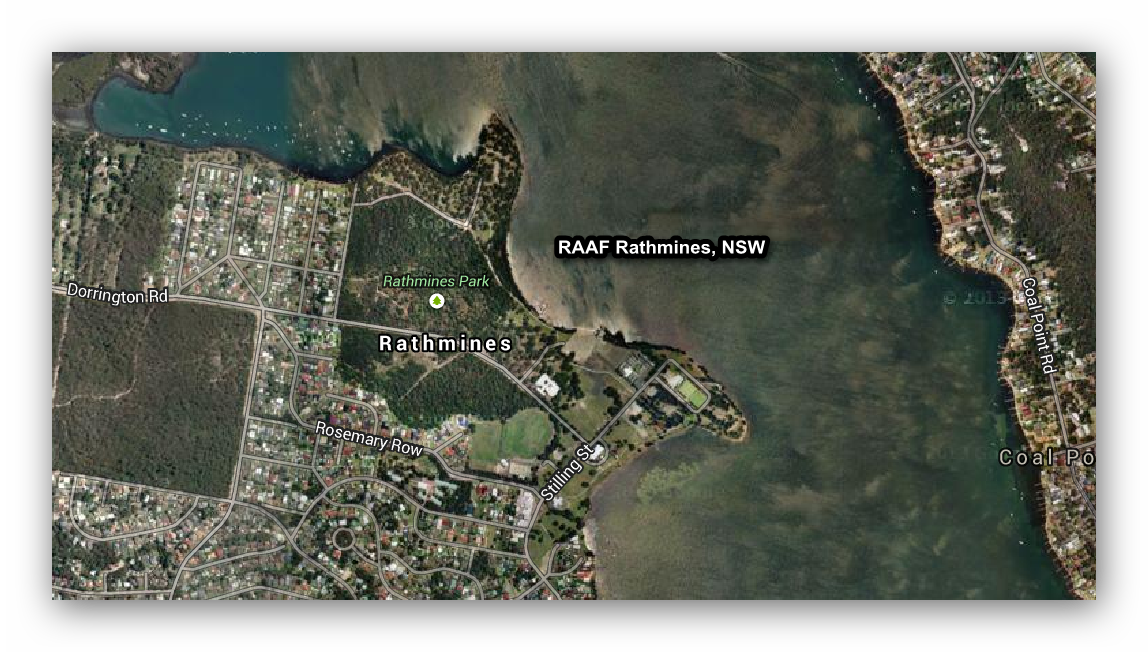 Early European settlement around Rathmines took place in the 1840's with the name of Rathmines derived from the Hely family (extensive landholders on the Central Coast) that came from a town named Rathmines, located near Dublin in Ireland. The Hely family built a homestead and farmed a significant portion of the land that now makes up Rathmines Park.

However the story of Rathmines as an air base starts when the site on the shores of Lake Macquarie was identified as a possible place for a flying boat base in 1936, after the Director of Duties, RAAF HQ Victoria Barracks, Melbourne gave instructions to investigate and recommend a site for a flying boat base in the Newcastle region. A ground and water survey of the bay and inlet was undertaken, and while the Rathmines site was the second recommendation, it was considered as the most likely site, and was chosen.

During July 1938, No 5 Squadron from RAAF Base Richmond was sent to investigate landing areas and sites around the Lake Macquarie area for the establishment of the Rathmines Base and the eventual move of the squadron. On January 1 1939, the No 5 squadron was renamed No 9 (Fleet Cooperation) Squadron. Further surveys of the area were made in August 1939, and in September camp was set up, with arrangements made to rent local cottages as living quarters. The Base became operational when the No 9 Squadron transferred from RAAF Base Point Cook to the selected 31 hectare site. 9 Squadron was initially equipped with Supermarine Seagull flying boats.

PBY-5 Catalina flying boats were next to arrive in February 1941, and by September 1943 the base comprised 14 Catalinas, two Seagulls, a Dornier Do24 and a Douglas Dolphin.

Rathmines also housed Walrus, Martin Mariner, Kingfisher and Short Sunderland and Empire flying boats. With 230 buildings and other marine facilities there were 40 aircraft and almost 3,000 RAAF personnel at the base c.1944-45. As well as being a repair, servicing and new aircraft conversion centre, it was also a base for air crew training.  A total of 168 Catalinas were flown with the RAAF, the Catalina flying boats being the only aircraft to see continuous service with the RAAF during wartime operations against Japan. Nevertheless, and somewhat sadly, in January 1952 the Catalina was declared surplus to requirements and the aircraft taken out of service.

Post-WWII Rathmines continued as a ground training base with an Officers' Training School and training facilities for senior NCOs, PT instructors and national servicemen. The operational focus shifted to "search and recovery" operations. An airstrip was also roughly built on the promontory for the sole use of the C.O.'s Auster aircaft. Seaplane operations were progressively disbanded during the 1950s.

Circa 1962 the site was sold to Lake Macquarie Council, following which many smaller buildings were purchased and removed from the base or re-purposed by the Council as, for example, local community halls. Of 230 buildings just 10 remained intact in 1998. A large seaplane/flying boat servicing hangar was also disassembled and shipped to RAAF Base Richmond to house the RAAF's initial fleet of  Lockheed C-130 Hercules aircraft.

The Rathmines base has since been heritage listed by the NSW State Government.

See also:
See also the Woy Woy/Ettalong airstrip and nearby Tuggerah airstrip (where Catalinas were reputed to do "touch and goes").

Want even more? Here is an updated list of Sydney's airports.
Posted by gtveloce at 5:58 AM