The Oaks aerodrome, a WWII satellite nestled against the mountains

The Oaks 'dispersal' airstrip, another WWII runway, as per Menangle and several others. 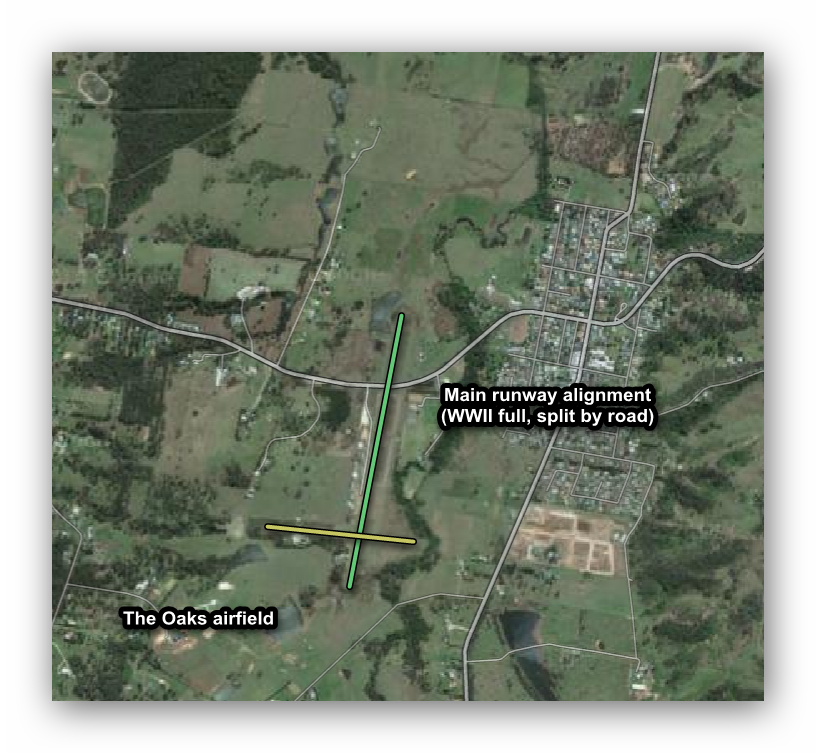 The image above shows what I presume to be the WWII runway alignments, as shown on a recent Google Map. The green alignment is "certain" based on what is visible and recorded elsewhere, however the shorter yellow alignment is probably only a recent development post-WWII.

The Oaks airfield was constructed circa 1942 as a satellite aerodrome to RAAF Camden. There was a 5000 foot x 150 foot sealed runway aligned 36/18 and split by Burragorang Road (complete with gates to stop stray cars!). Operations probably included Hudsons, B24 Liberator bombers and Kittyhawks.

Not required post-war by the RAAF, it was offered for sale in 1946. The current strip is a private field, roughly the southern half of the wartime area. The original runway was removed but a 950m 18/36 main grass strip (perhaps a wartime taxiway) was left and a new grass strip of just 400m added (aligned 09/27).

One description states that the graded and grassed strip was 5000x 400ft and confirms the "centrally located" sealed runway measured 5000x 150ft.

Wikipedia has a detailed and fairly well kept description of history and current operations. Worth noting that Badgery's Creek has been selected to be Sydney's 2nd "major" airport site, if you discount Bankstown, rather than the Wilton option.
Posted by gtveloce at 1:41 AM