Bankstown Airport, once the busiest by movements in Australia but I'm told it's just 4th now. I think they are miscounting but anyway, that's the official story. Bankstown has multi-runway parallel strips, plus some crossing (but disused). There are three main parallel east-west runways, a long centre runway for high-performance aircraft, a northern runway for arrivals and departures, and a southern runway for circuit training.

Originally planned in 1929, but not established until 1940 as an RAAF facility. Subsequently taken over by the USAAF and established as a key strategic air base to support the war effort, circa 1942. It transferred from US to British Fleet Air Arm operations in 1945, and was known as Royal Naval Air Station Bankstown, or HMS Nabberley, until handed back to the RAAF in 1946. Interestingly, several "dummy houses" were built to make Bankstown Airport appear as a farm, with disguised hangers and fake roads.

There was an underground command post on Black Charlie's Hill with gun pits located within and around the airport to protect it from air attack. Another anti-aircraft battery was situated on high land on the corner of Bexley Road and Homer Street, Clemton Park.

de Havilland and its successors have been located at this airport since 1942, occupying the area south of the main runway. RAAF Mosquito "Wooden Wonder" bombers were built there. The primary (centre) runway (11C/29C) is 1,415m x 30m, limited to 50 tonnes MTOW.

Marshall Airways and Sid Marshall's musuem was based here, too - very important information to any Sydney-born child obsessed with aviation in the late '60s and early '70s.  I undertook flying training here at Illawarra Airways, too, so it's of some personal interest. Not that I ever finished that training: I got distracted! 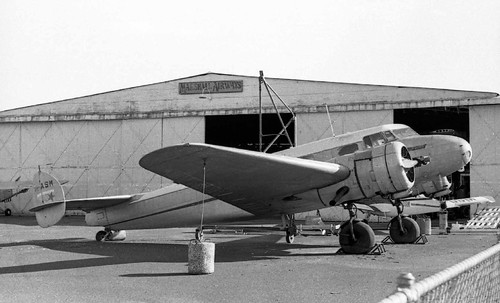 These days Bankstown is lumped into a commercial bundle with Camden via privatisation. That means user pays and "other use" optimisation, so - for me at least - some of the charm has gone. Again, that's life.
Posted by gtveloce at 11:09 PM