First of all, check out Penrith Speedway, the one in Belmore Park. The one with an airfield. Near Thornton Hall. Just north of the railway station. 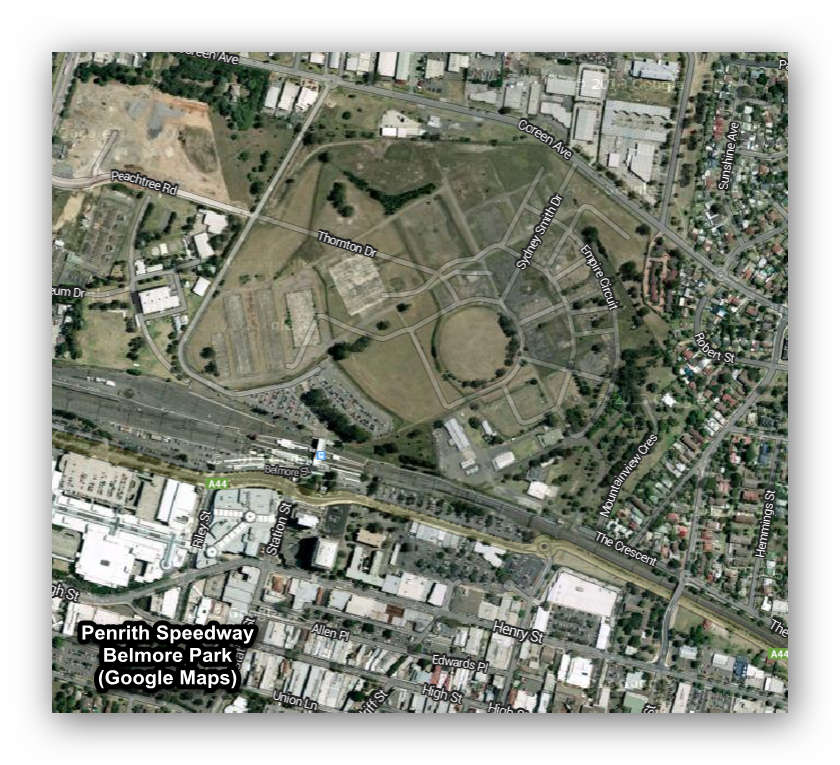 Some people have suggested that "dirt track" motor bike racing also occurred over the railway line at Jamison Park, on Penrith's southern side. It's possible. Make that 2. (Jamison Park was also an airfield.) 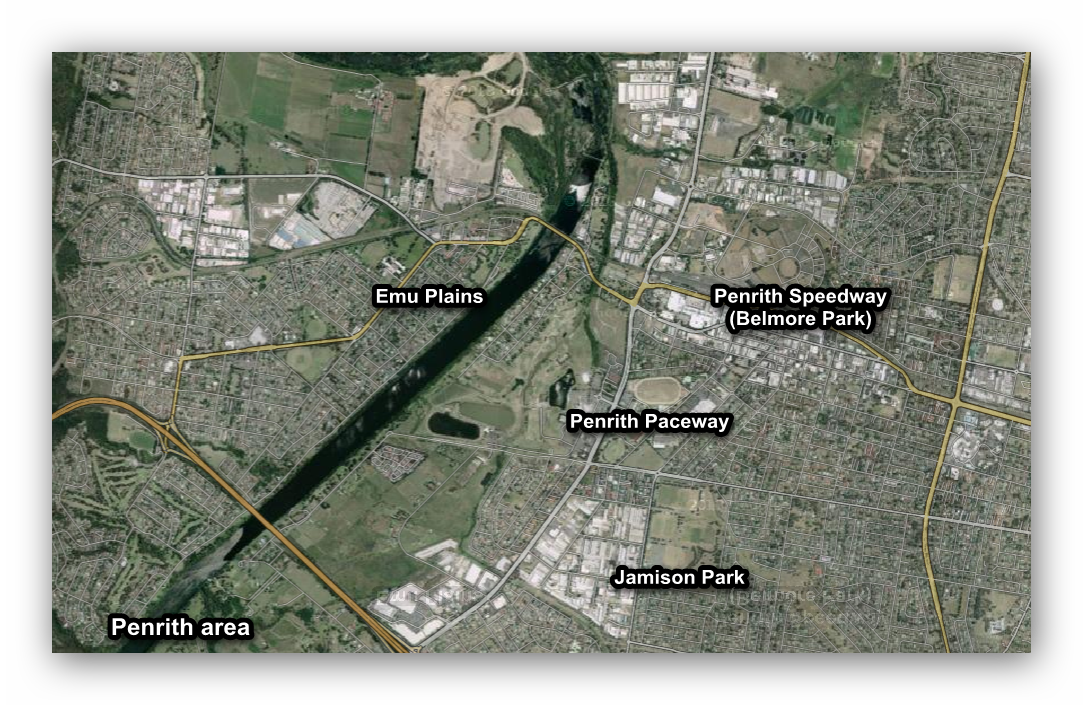 Or how about this one: Brooklands. Make that 3. 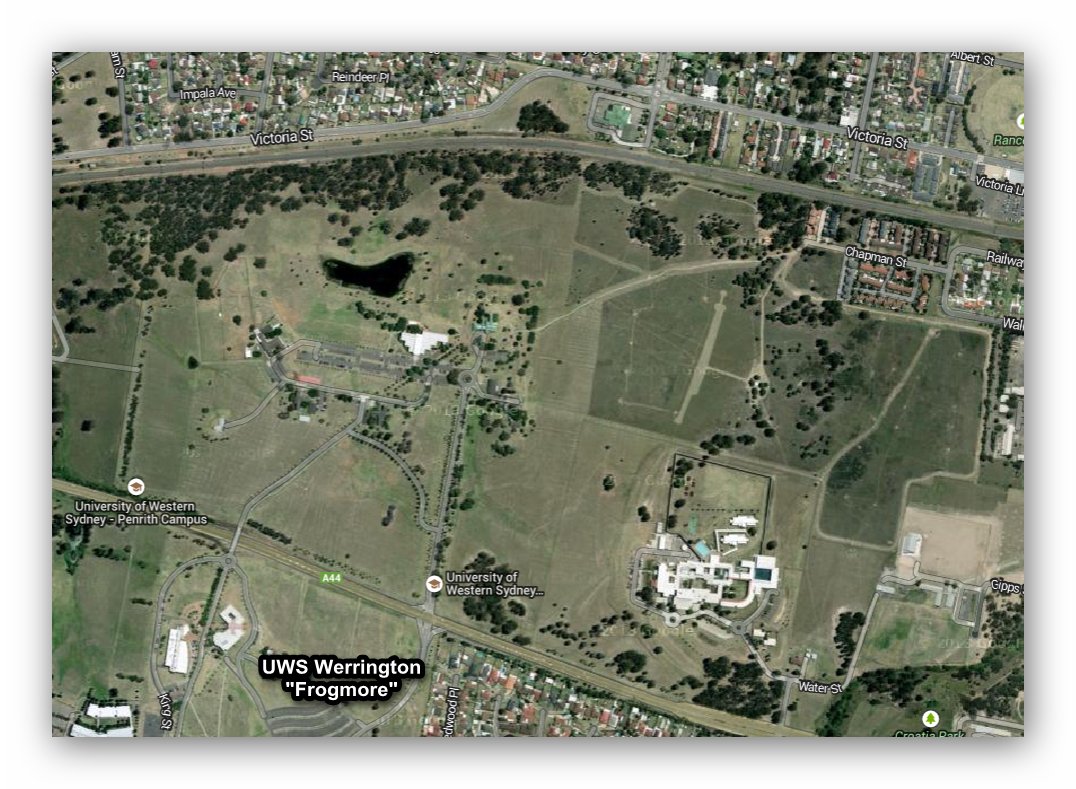 According to the Penrith City records the Western Suburbs Motor Cycle Club approached their local Member of Parliament, Sydney Smith, for the loan of some of his paddocks to hold a race meeting. Smith had quite a bit of land, having inherited Thornton Hall.

According to multiple records Penrith Speedway was opened on Smith's land in 1920. It was operated by Western Suburbs Motor Cycle Club. It closed in October 1930 because of flooding by Penrith's water supply, something that resulted in legal action by Smith against the Council. It was reopened in 1936 by Frank Arthur of Empire Speedways and ran until 1941 when the Army requisitioned the land. There was a war on, after all.


I'm not so sure Smith was the local member, though. There were 2 "Sydney Smiths", father and son, and whilst both were prominent citizens (the father in particular a serial administrator and politician) neither appears to have been "the local member", at least not at the date assumed. Sydney Snr had retired, for starters, passing away in 1934.

"Defeated in 1906, Smith retired to his inherited estate, Thornton Hall, at Penrith. During World War I he lived in Sydney. His youngest son was killed at Gallipoli: Smith was president of the Sailors' and Soldiers' Fathers' Association (1923-28). A teetotaller and non-smoker, he was genial, earnest and energetic, with 'good judgement and a tenacious memory'. Smith died at Croydon on 21 February 1934 and was buried in the Anglican section of Rookwood cemetery..." (Australian Dictionary of Biography.)

So Smith the elder was alive and living in Penrith at the right time, but he had seemingly retired from politics after that 1906 defeat. He had indeed been the local member (the MHR for Macquarie) up to 1906 but not after that date. So technically he was the former member, not "the local member" as umpteen websites suggest. Could it have been his cricket-playing son, instead?


"His eldest son Sydney was born on 1 March 1880 at Surry Hills and was educated at Annandale and Bathurst Public schools and at Hawkesbury Agricultural College. He worked as a bookkeeper on J. S. Horsfall's Widgiewa station in the Riverina and after being rejected as medically unfit for service in the South African War, joined the New South Wales public service in February 1902. In June 1912 he was promoted clerk in the stock and brands branch of the Department of Agriculture at a salary of £300 and on 30 December next year at St Philip's, Church Hill, married Minnie Violet Crossman (d.1969), a nurse. Chief clerk from 1919, he was secretary of the stock and brands branch, registrar of brands and of the board of veterinary surgeons in 1921-34, then chairman of the Local Land Boards under the Western Lands Act of 1901. He retired in 1944." (Australian Dictionary of Biography.)

Nope. Apparently not. He was big in the world of cricket administration though. Folow that biography link for more on that.

There's more on that historic Penrith speedway here. And here. And Library of NSW pics as well.


Meanwhile the Brooklands track was constructed - we think - by Victor Sutherland of "Frogmore", apparently up and running circa June 1923, catering for both cars and motor cycles. This site was on the eastern part of his property, at what is now known as University of Western Sydney, Werrington Park. 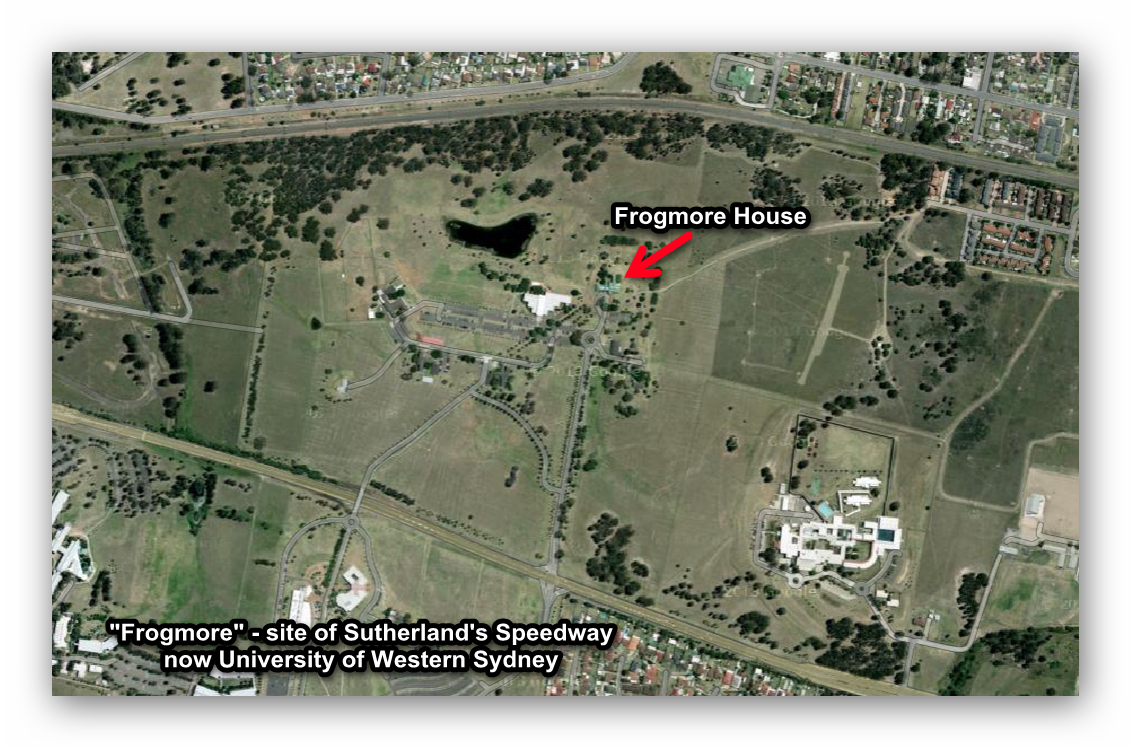 No, I can't be sure what - if anything - is left of that speedway.

I can't even be sure he owned "Frogmore". I believe his wife did, however.

What we do know is that in 1806, 600 acres ('Werrington North') was granted to Mary Putland, the daughter of Governor William Bligh. Mary married Maurice O'Connell (then Lt Colonel of Lachlan Macquarie's 73rd Regiment) in 1810, the Governor granting her an extra bonus of 1,055 acres (427ha, apparently named 'Coallee'; now a streetname - a 'Place' - in South Penrith) adjoining what we know to be Frogmore to the south. This grant brought Mary's total holdings to 3,000 acres (1,214ha). Lucky Mary.

The O'Connell's main farm holdings were at Riverston(e) but, being rather well off in the manner of these things, they didn't regularly live at either location. Whilst from about 1830 there were certainly house(s) on the site, the O'Connells were actually resident at Woolloomooloo, or abroad. From 1840 the O'Connell's son, Maurice Charles, and his wife Eliza, actually lived for some time on the Frogmore site. After Maurice’s death, however, the site was sold off and subdivided in the 1850s.

Now this is where the Sutherlands come into it. Just. Parts of the subdivision were bought and reunited firstly by Caroline Sutherland c.1919, and then by an iron merchant, Alan Williams, in 1935.

Between 1919 and 1935 the Sutherland estate hosted diverse uses such as 'vineyard', 'racing track', 'golf course' and 'joy flight aerodrome'. Or did it? Just how many of these activities came to pass may be moot. And the property was in Caroline's name, not Victor's. Not that this was so unusual, of course, but may have been a complication later.

So Victor's vision is a bit blurred - but we can say for certain that he had plans and sought out investors but ultimately only delivered on part of his plan. It was his wife's untimely death that apparently scuttled the full deal.

Nevertheless it was a magnificent vision. Claimed (presumably by Sutherland and his supporters) to be the "best speedway in the Southern Hemisphere" it was described as a "1.5 mile high-speed banked track for cars and motorcycles". Check out Olympia Speedway, Maroubra, for comparison.

It's believed that a one mile (not the expected 1.5 mile?) oval concrete bowl was built but the rest of the venue was never finished. The vision for the complex included the speedway plus an aerodrome and sports fields. Events overtook Sutherland and the vision was never fulfilled.

Of course it doesn't end there. Over the years many racing tracks have come and gone, and today motor racing continues at the Nepean Raceway near Castlereagh. This track was begun in 1959, and today the circuit is owned by a consortium of about eight Sydney Motor Cycle Clubs. Again this is dirt bike racing on a short, tight circuit. I make that number 4 of this series of Penrith-area speedways. 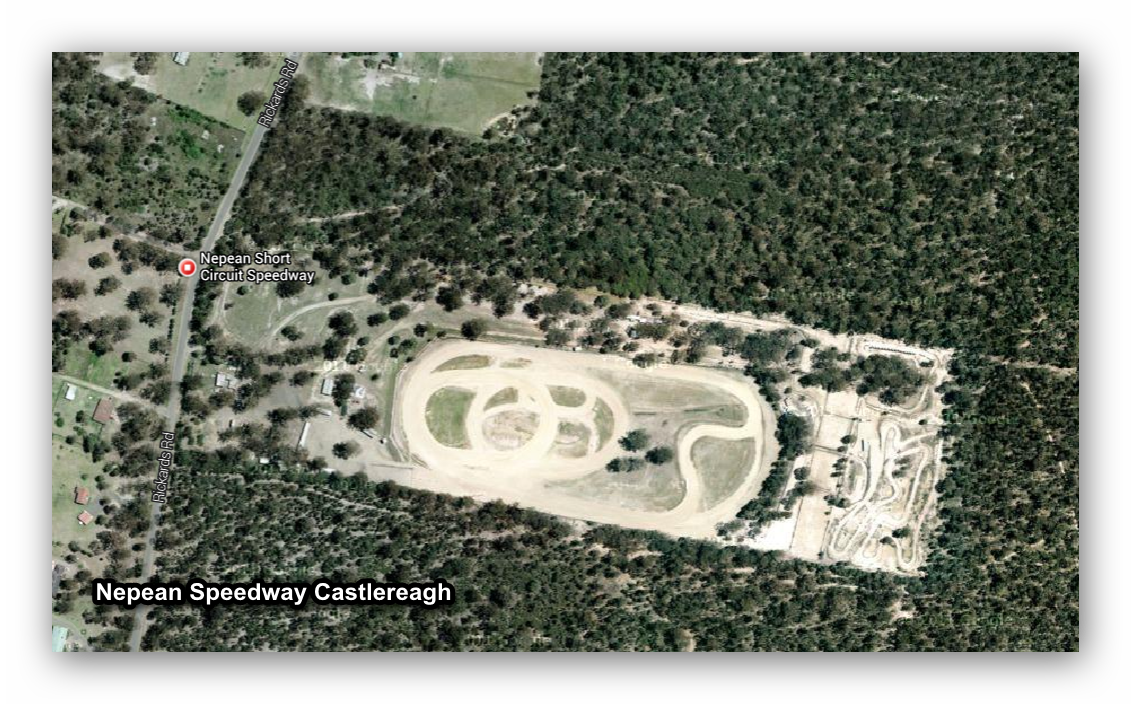