By the way, I'm not obsessed with the history of military establishments in Sydney, it just happens that many of the locations that interest me have military links. And one thing just leads to another, doesn't it?

Anyway, to get back to the subject in hand, No. 1 Central Ammunition Depot (1 CAMD) was originally formed as 1 Central Reserve at Marrangaroo, New South Wales on 1 April 1942. Sub-depots were also formed at Moorebank and Glenbrook. The primary role was storage and supply of munitions for the RAAF. In August 1942 Picton (Redbank Range) railway tunnel became a storage area and given the title 4 Sub-Depot. Further sub-depots created included Glenbrook (Lapstone) tunnel, Clarence Tunnel, Kowguren (Qld), Hume Camp (Albury), Mt. Druitt and Kingswood (probably St Marys).

And of course Ropes Crossing was a nearby munitions factory with its own railway branchline and extensive internal tramway.

But let's describe what was once Marrangaroo Army Camp in a bit more detail. It's near Lithgow, NSW, situated at the end of Reserve Road. It was a major ammunition depot from 1941 to the late 1980s. It is now used for demolitions and training by all three Australian Defence Force services. But it's not Orchard Hills, is it? If you look closely and zoom in on the Google Map you'll see traces of the old spur line branching from the main railway line, entering the defence lands on the northern side of the existing buildings.

It's worth noting that during World War II Marrangaroo housed then-secret wartime chemical warfare facilities; Marrangaroo was the administration headquarters for all of the Royal Australian Air Force chemical weapons Stores, kept in tunnels and sidings at Marrangaroo and the various (otherwise disused) railway tunnels previously mentioned.

In September 1943 a War Dog Training School was established at Marrangaroo, transferring to the dispersal airstrip at Mt.Druitt in 1944.

Which (finally) brings us to Orchard Hills. The 1 Central Reserve headquarters were transferred to Kingswood (Orchard Hills) on 12 November 1956. Marrangaroo closed in 1958 (to reopen as a joint services training facility at a later date).

The RAAF first began using the Kingswood site in early 1945 for local explosive storage. This avoided double-handling of explosives on consignment to and from Sydney. The Royal Navy and Royal Australian Navy also used the area to store wartime munitions (see below). After the transfer in 1956, Kingswood was developed further to encompass guided weapons as well as the disposal of obsolete munitions. From January 1963, 1 Central Reserve's responsibility included explosive inspection of all RAAF units. On 1 October 1967, 1 Central Reserve was renamed 1 Central Ammunition Depot, its role evolving over time into a centre of expertise for the handling and storage of explosive ordnance as well as training. In April 1993 the Bogan Gate depot (2 Base Ammunition Depot Bogan Gate approx 40kms west of Parkes) was reactivated as Detachment A to 1 CAMD, with excess ordnance from Kingswood being relocated from July 1993 for long term storage.

A more extensive history (from which much of the above was derived) is available at Robert Curran's RAN Armament website.

Further detailed work including original land grants may be found at this Penrith City website. That resource includes details on Frogmore, Regentville and the Mulgoa Irrigation Scheme. I'm not kidding. The Orchard Hills area and the York Estate (to the north) were within scope of this proposed and ultimately unsuccessful irrigation scheme. The promoter was George Chaffey, the Canadian irrigator who had arguably failed, despite considerable effort, expense and no little amount of political struggle to make a success of the irrigation scheme at Mildura, in company with Henry Gorman (of Hardie and Gorman, estate agent and property speculators) and Arthur Winbourn Stephen of Mulgoa. The scheme was authorised by the Mulgoa Irrigation Act, as passed in December 1890, which permitted the promoters to acquire land, erect plant, and use and distribute the waters of the Warragamba River through to South Creek and as far north as St. Marys. The proposal was contemporary with the Wentworth irrigation scheme.

It wasn't the first time that irrigation was used in Mulgoa but it was the most ambitious attempt. A more successful - if short-lived - example was in evidence just a year earlier at George Cox’s Winbourn estate.  The irrigation engineering included a 16 h.p. steam-driven pump and a 75,000 gallon capacity cement-lined reservoir set atop the hill above the house.

In contrast the more ambitious Mulgoa Irrigation Scheme required the sinking of a 47 ft deep brick-lined shaft complete with connecting tunnel. Water would be drawn from the Nepean River and then stored in a 4 million gallon earthen dam. At the wellhead a steam driven suction pump was apparently erected. From the reservoir a canal (only partially completed) including tunnels under Littlefields Road and The Northern Road, wended its way north-east to the St. Marys district. Integral to the scheme were the town and farm subdivisions of  Littlefields, formerly part of Cox's earlier attempt at Winbourne. Two new towns were also planned, being Sovereign Town and the Mulgoa Irrigation settlement. The company was listed on the stock exchange in April 1892. Having completed the engine house the company went into liquidation in May 1893, with the works being sold at auction in 1898. More detail is available at this Penrith City website.

But I digress. Other sources have suggested that naval armoury needs also drove development of Orchard Hills. In 1944 the Royal Navy (RN) took over operations of the Schofields airfield (well to the north of Orchard Hills) in preparation for the planned assault on Japan; Schofields thus became the support base for the RN Fleet Air Arm; by April 1945 some 1,600 personnel were stationed at the Schofields base. Presumably they needed to house some ammunition, too, preferably well away from civilians (and themselves). So the establishment of an ordnance storage facility at Orchard Hills, circa 1945, for both the RN and the Royal Australian Navy (RAN) was a justifiable outcome.

Later the RN/RAN facility became No. 1 Central Ammunition Depot for the RAAF and RAN, and more recently "Defence Establishment Orchard Hills". I believe it's on the market if you are looking for a sizable block of land in the area. 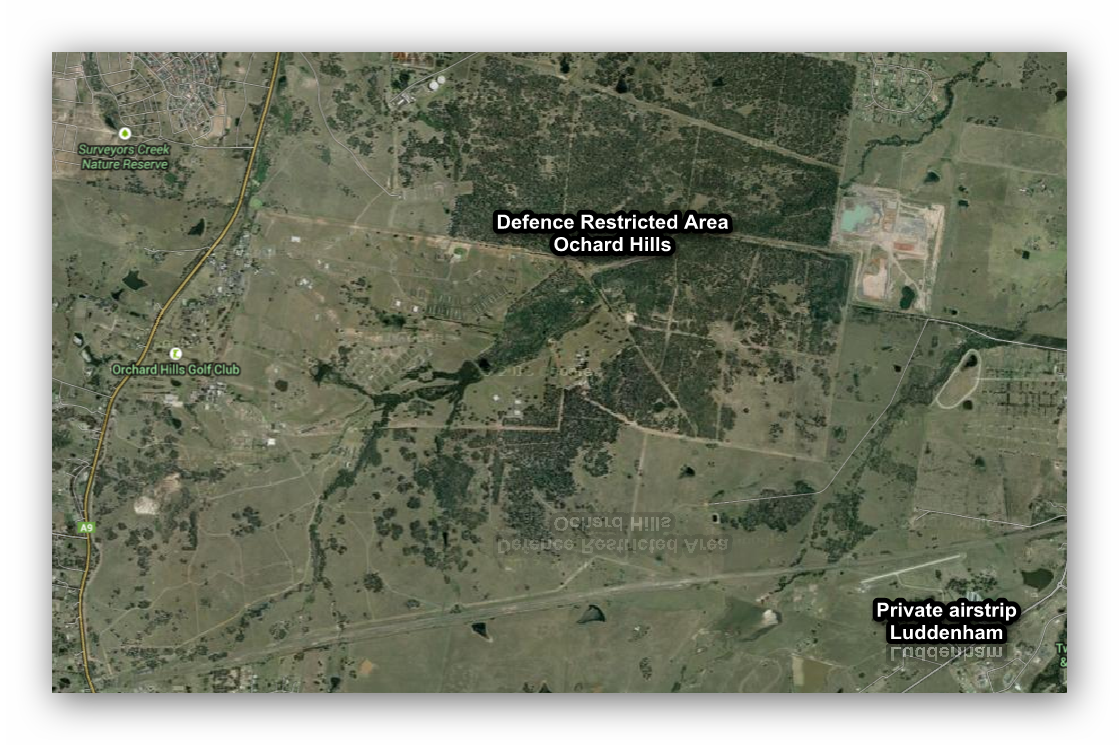 Image via Google Maps, by the way. The Orchard Hills establishment fills the centre of the screenshot. In the southwest corner of the defence land is the "old" or "ANZAC" area, occupied by the US Army for munitions purposes from 1942 until war's end. The old road layout can still be seen. Again Robert Curran's website provides more detail.

Penrith is to the north and slightly west, out of view in this image. Richmond is further north again and Schofields a little closer and slightly east.  You can see Sydney's water supply running left to right in pipes at the bottom of the image. The airstrip on private land south of those pipes is Kennett's airfield ("Kennett G C & H L Pastoral & Aviation" in the Yellowpages) at Luddenham (near the old RAAF Fleurs strip). You can see a couple of hangars and a parked C337 by the looks of it if you zoom in close enough.

I'm sure that a lot of people would be interested in the things you have to write about the military locations in Sydney even if you worry you're too focused on it! Don't give up writing about this stuff though! I'm sure your regular followers love coming here for whatever you're going to write about!

Thanks for the encouraging words, Edward. Sadly I've got more ideas about what to write about than I have time to research and write them! But I'm working on it!