The Mulgoa Irrigation Scheme - including the "Square Dam" reservoir

Ah, the Mulgoa Irrigation Scheme. I'm not kidding. The Orchard Hills area and the York Estate (to the north of Mulgoa) were within scope of this ultimately unsuccessful irrigation scheme.

The promoter was George Chaffey, the Canadian irrigator who had arguably failed, despite considerable effort, expense and no little amount of political struggle to make a success of the irrigation scheme at Mildura, in company with Sydney local Henry Gorman (of Hardie and Gorman, estate agent and property speculators) and Arthur Winbourn Stephen of Mulgoa.

Chaffey was joined by his brothers in his efforts to make the Mildura scheme work and, to be fair, as a family they finally managed to demonstrate some progress. Ultimately, though, it was left to Mildura locals and the state government to grow the scheme into its later, broader success.


The Mulgoa Valley scheme however was buoyed more by the Chaffey's North American successes and was duly authorised by the Mulgoa Irrigation Act, as passed in December 1890. The Act permitted the promoters to acquire land, erect plant, and use and distribute the waters of the Warragamba River through to South Creek and as far north as St. Marys. The proposal was contemporary with the Wentworth irrigation scheme.

It wasn't the first time that irrigation was used in Mulgoa but it was the most ambitious attempt. A more successful - if short-lived - example was in evidence just a year earlier at George Cox’s Winbourn(e) estate.  The irrigation engineering included a 16 h.p. steam-driven pump and a 75,000 gallon capacity cement-lined reservoir set atop the hill above the house. There is a photograph of the pump site and remains (as they were) here. More photographs may be found in the Penrith City heritage database.

Some Cox family history, perhaps? William Cox was born at Wimbourne Minster, Dorset, England in 1764, eventually becoming a Lieutenant in the New South Wales Corps. He arrived in Sydney on 11th January 1800, accompanied by his wife and four sons: James (aged 10); Charles (7); George (5); and Henry (4).  After an unsuccessful start at “Brush Farm” (Pennant Hills), William and his family settled in 1804 at Windsor, on his Clarendon property. 1815 William was - famously - in charge of constructing a road over the Blue Mountains. The Coxes became interested in land in the Mulgoa district, and Edward - at the age of 4 years - received the first grant of 300 acres in 1810.

Edward's property is known as “Fernhill”.  George’s grant of 600 acres was made in 1816, being the future “Winbourne”. George, his father and brothers also took up land in the Mudgee district. George's obituary in the Sydney Morning Herald may be found at Trove.

In contrast to Winbourn(e), the more ambitious Mulgoa Irrigation Scheme required the sinking of a 47 ft deep brick-lined shaft complete with connecting tunnel. Water would be drawn from the Nepean River and then stored in a 4 million gallon earthen dam. At the wellhead a steam driven suction pump was apparently erected. 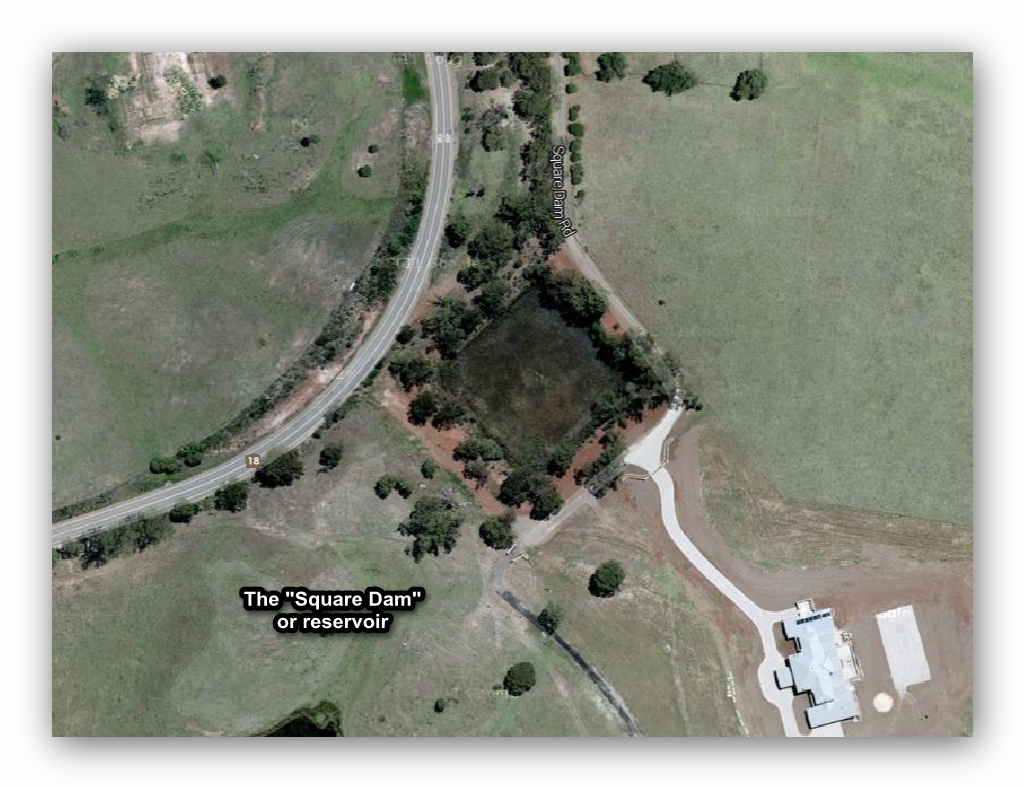 From the reservoir at Mulgoa Rd a canal (only partially completed) went due south before turning east and then north-east including tunnels under Littlefields Road and The Northern Road (then Bringelly Rd), wending its way north to the St. Marys district. Integral to the scheme were the town and farm subdivisions of  Littlefields, formerly part of Cox's earlier attempt at Winbourn(e).

Two new towns were also planned, being Sovereign Town and the Mulgoa Irrigation settlement. The company was listed on the stock exchange in April 1892. Having completed the engine house the company went into liquidation in May 1893, with the works being sold at auction in 1898.

All screenshots via Google Maps.

More detail is available at this Penrith City website.
Posted by gtveloce at 12:09 PM